We start this route again through the Sierra Oeste to have a stew at the end of the Km0 Restaurant. For that alone… it’s worth it!

We started rolling through the Cañada Real Leonesa and crossed the Arroyo del Hondillo. We continue along the Cañada heading north and cross the Perales river next to the collapsed Puente del Hoyo.

And we continue up Cañada, passing near the perimeter of the Los Barrancos Urbanization, which, although very far from its urban nucleus, belongs to Valdemorillo.

When we reach the asphalt we turn right towards the M-600. But immediately we turn left along the Path of Robledo de Chavela. We rolled through the Prado de las Porteras and finally reached the Cañada de la Cruz Verde through which we rolled towards El Escorial. But a little further on we turn left along the Colada del Camino de Villalba and that takes us to Zarzalejo Estación, right at the junction of the train track with the M-532 and M-533.

We pass the road through the M-533 and turn right to take the GR-10. But at the height of the Calzada Romana we turn left along paths to pass behind Zarzalejo Estación and its old Quarry and exit again through the M-533 to cross it on the Los Morales road that connects with Camino del Canillo and the Senda del Venero bring us closer to Zarzalejo. We stopped for a coffee with beautiful views of the Sierra Oeste at the Coté Café. (I think one of the best coffees in the Sierra Oeste).

Then we continue in the direction of the Cemetery to go down the GR-10 and then we leave along the Camino de Las Máquinas and that we walk until it ends at the intersection of Calleja de los Pozuelos and that leads us to pass the train track by the Zarzalejo Station bridge again.

We continue along the Camino del Caño Cojo, getting into sections of a fun path until we come out onto the track, passing by the two impressive granite stone masses that still have the staircase carved from its previous use as the Republican Observatory of Zarzalejo.

After crossing the M-532 we go up the Caminos de la Mata until we approach the town of Fresnedillas de la Oliva.

We cross the M-521 to pedal along the Cordel del Puente de San Juan until we turn through La Cañadilla and Los Enebros to meet again with the Cañada Real Leonesa reaching the Mirador del Hondillo. Then we play along the trails of Navalagamella to see the Bunkers del Bando Nacional. These are raised after the Battle of Brunete.

And we finally arrive at Navalagamella where that stew awaits us … reason for the route. 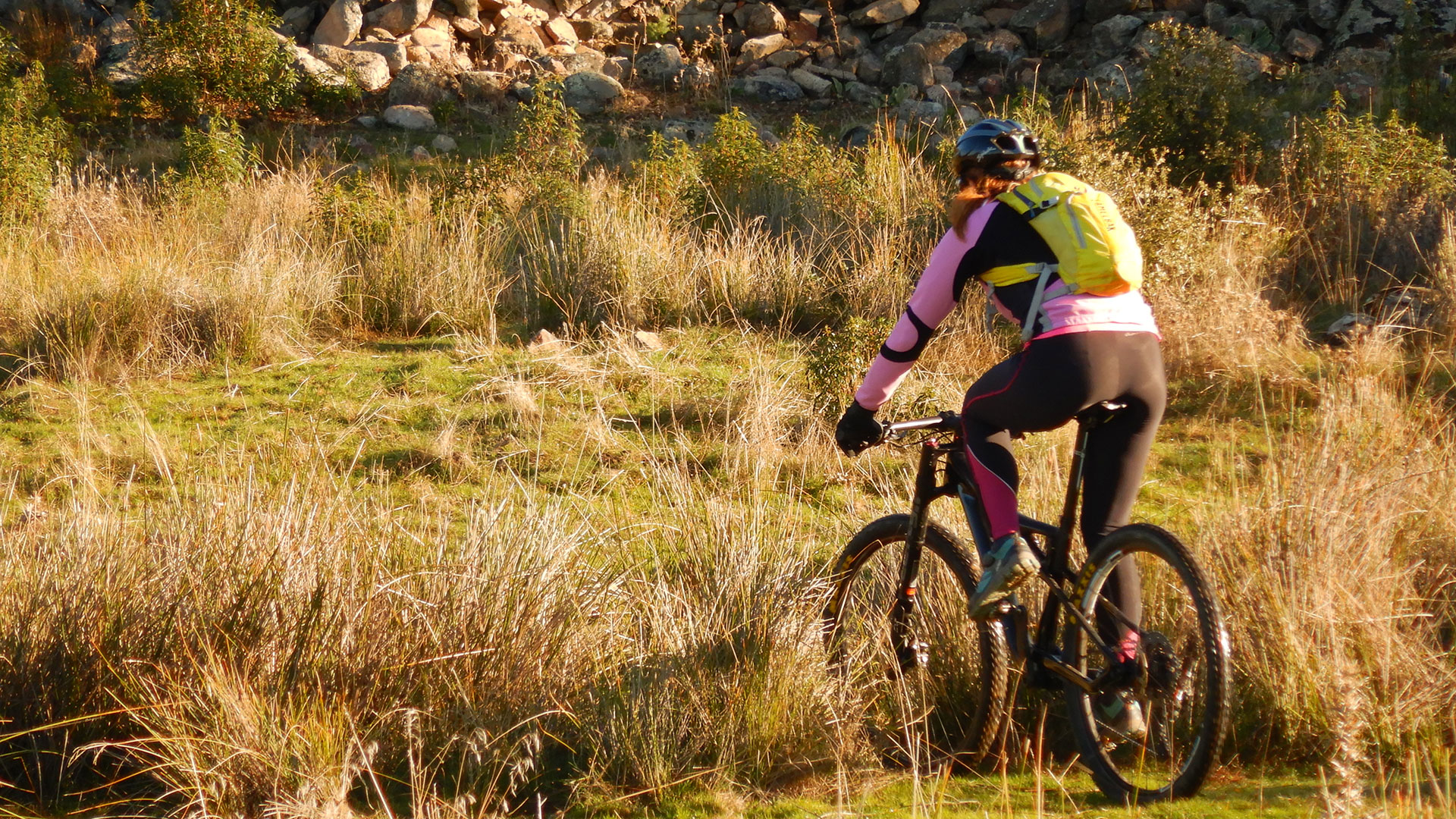 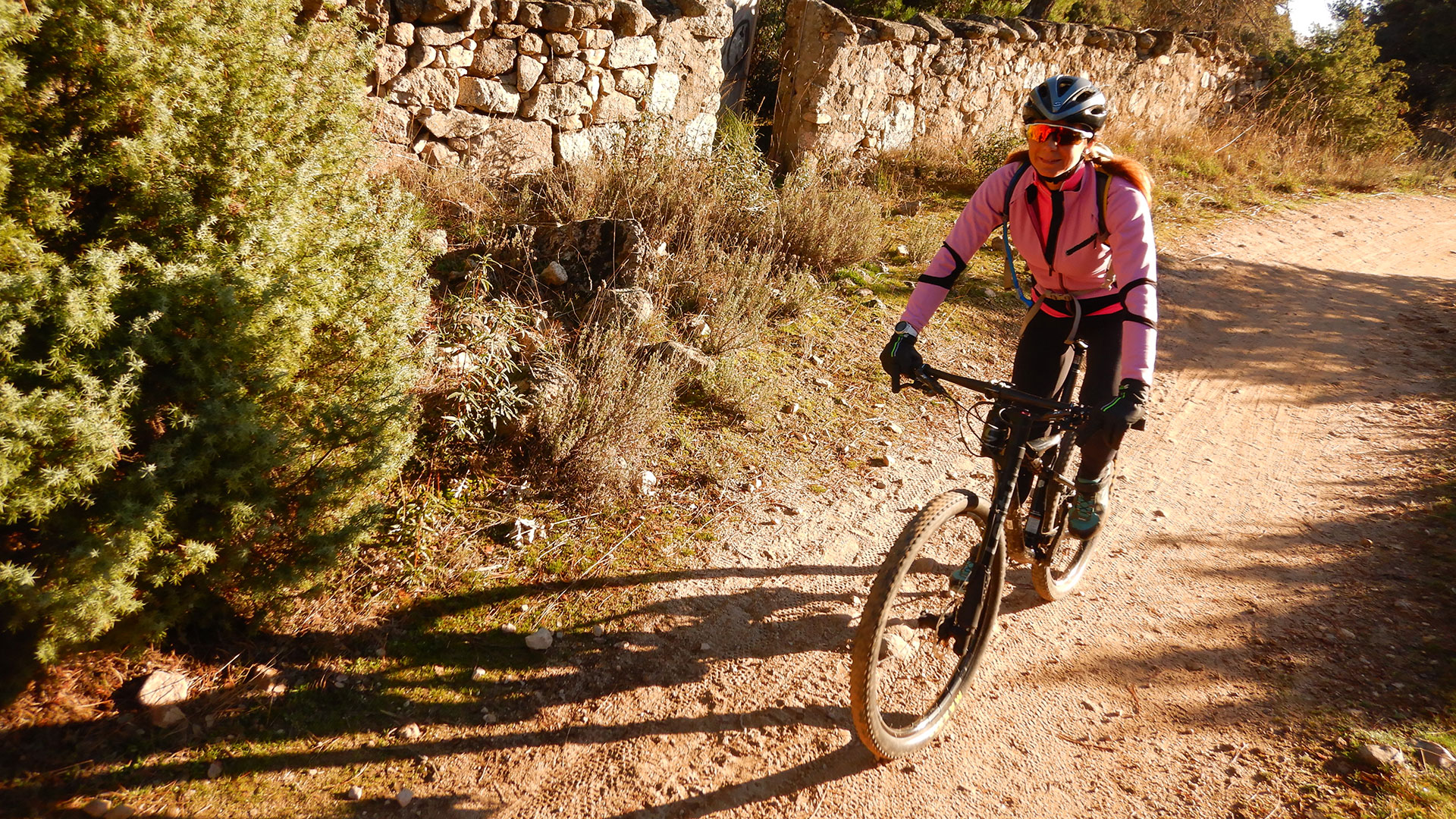 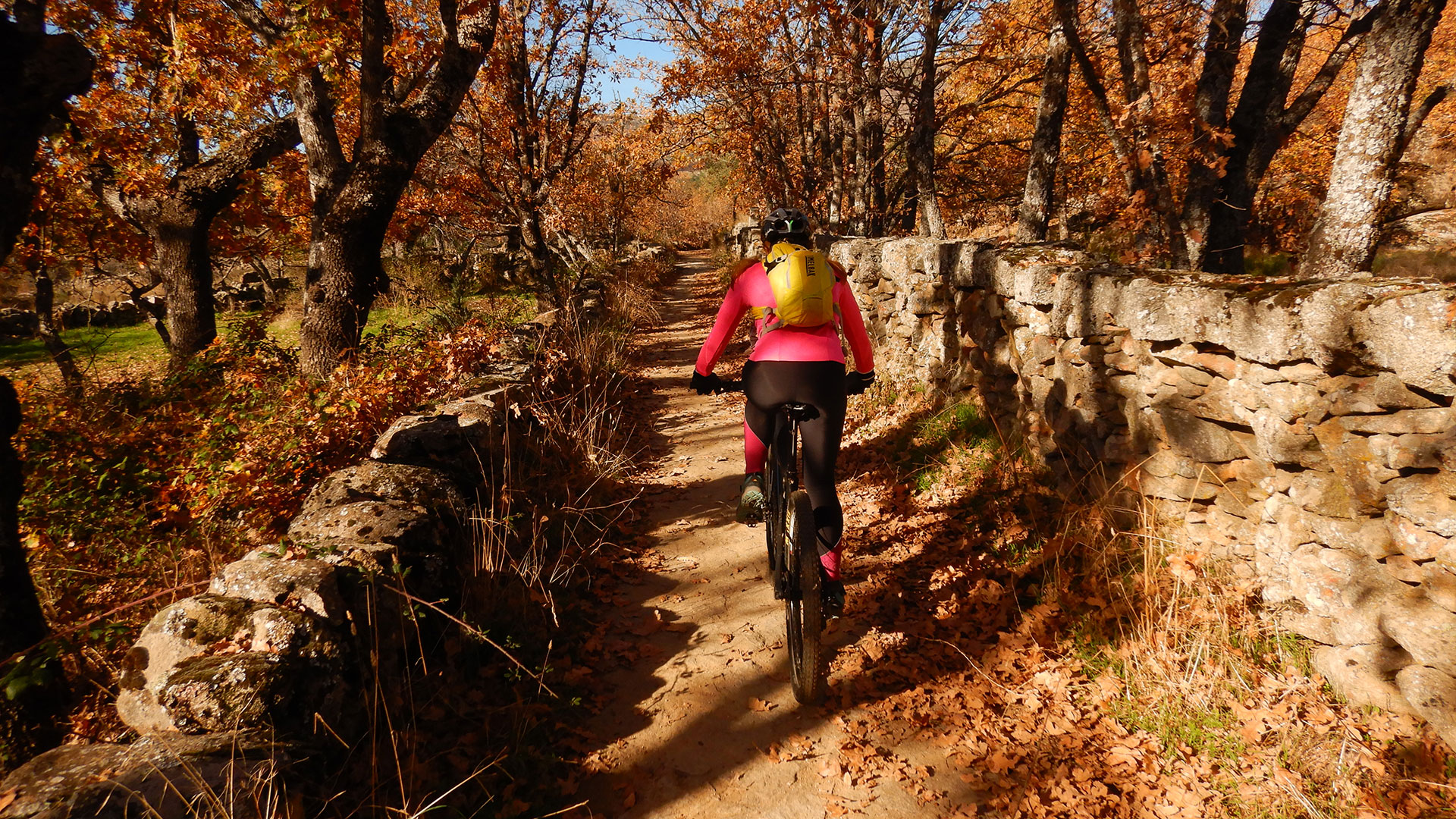 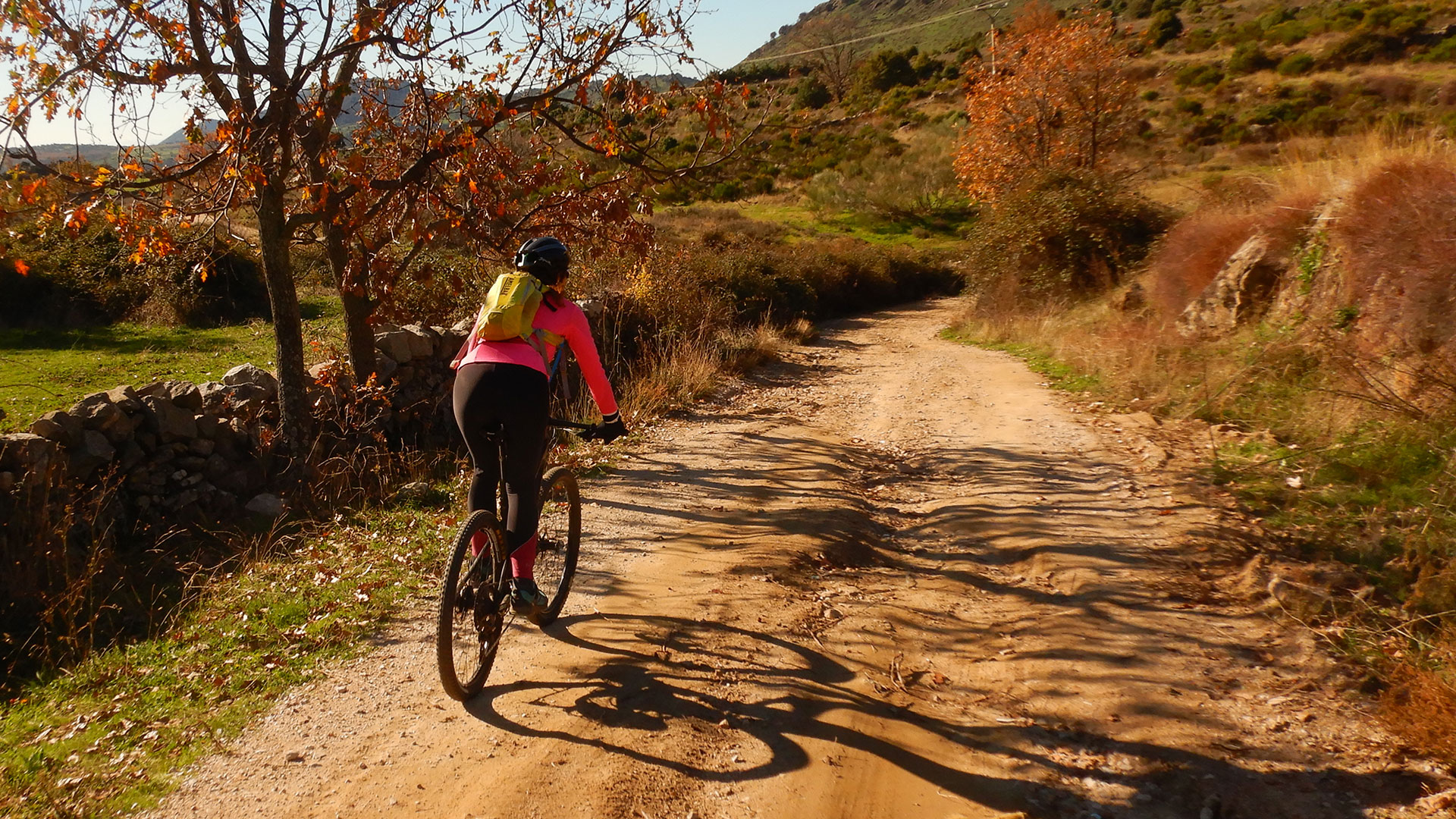 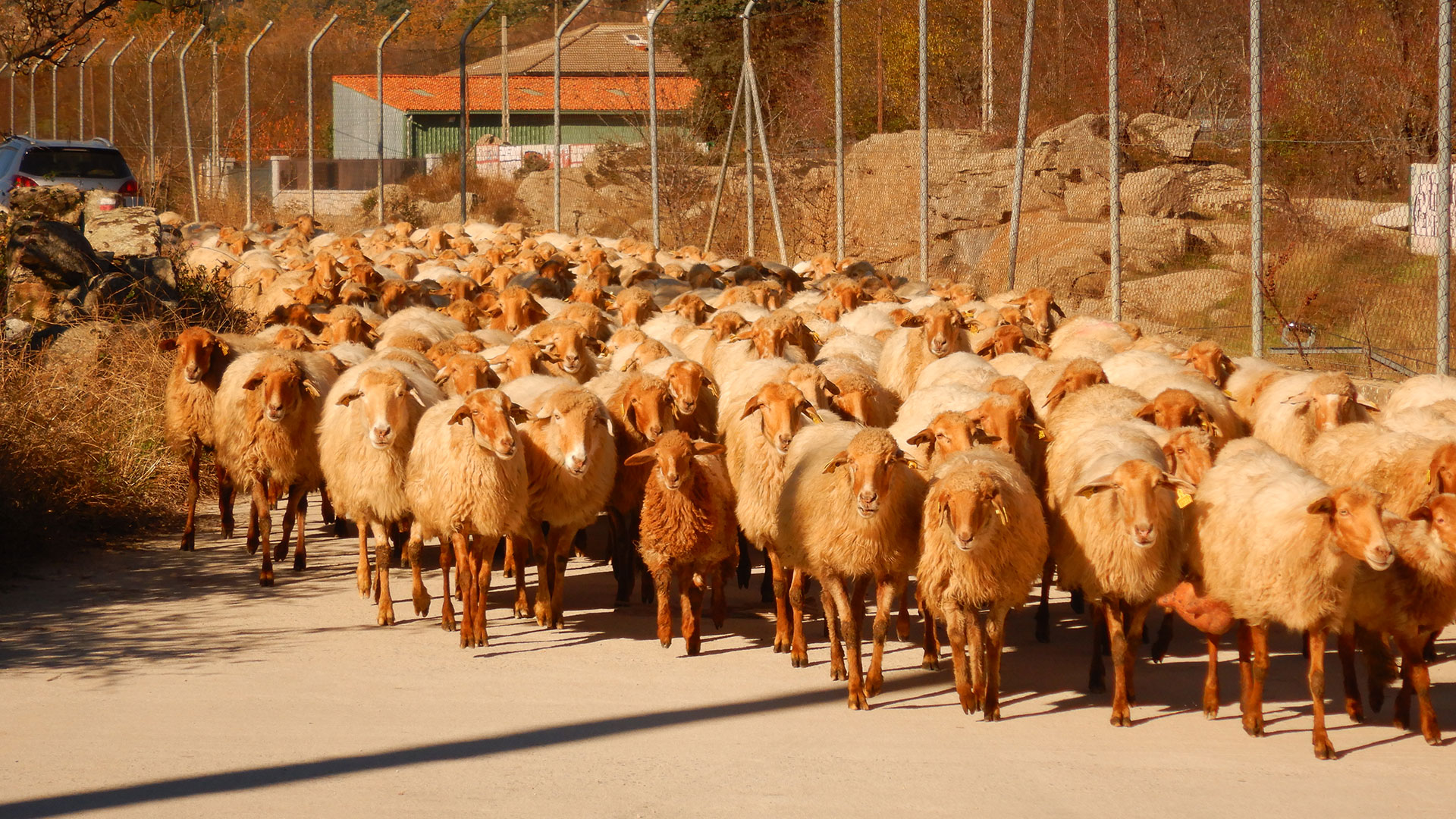 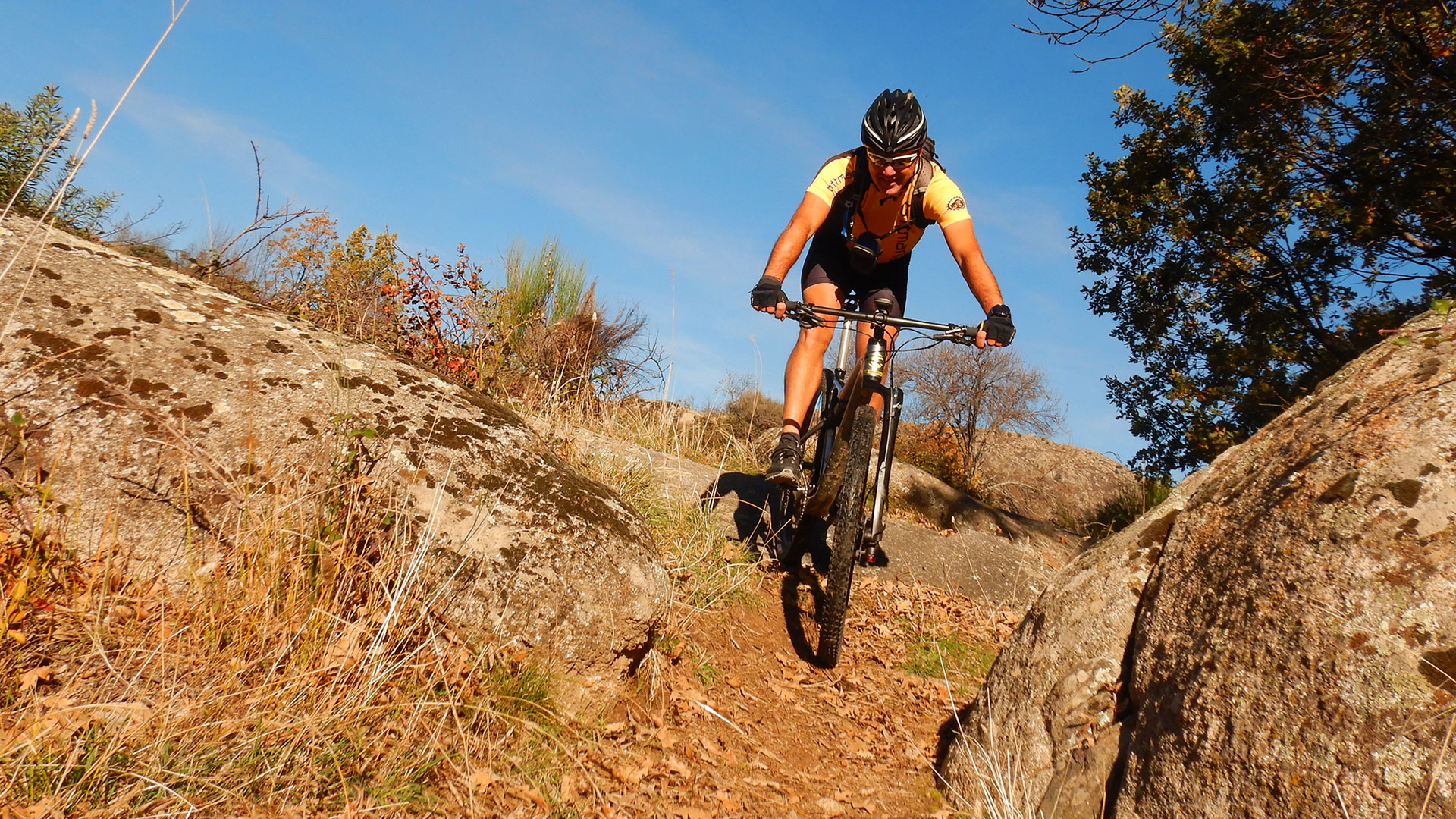 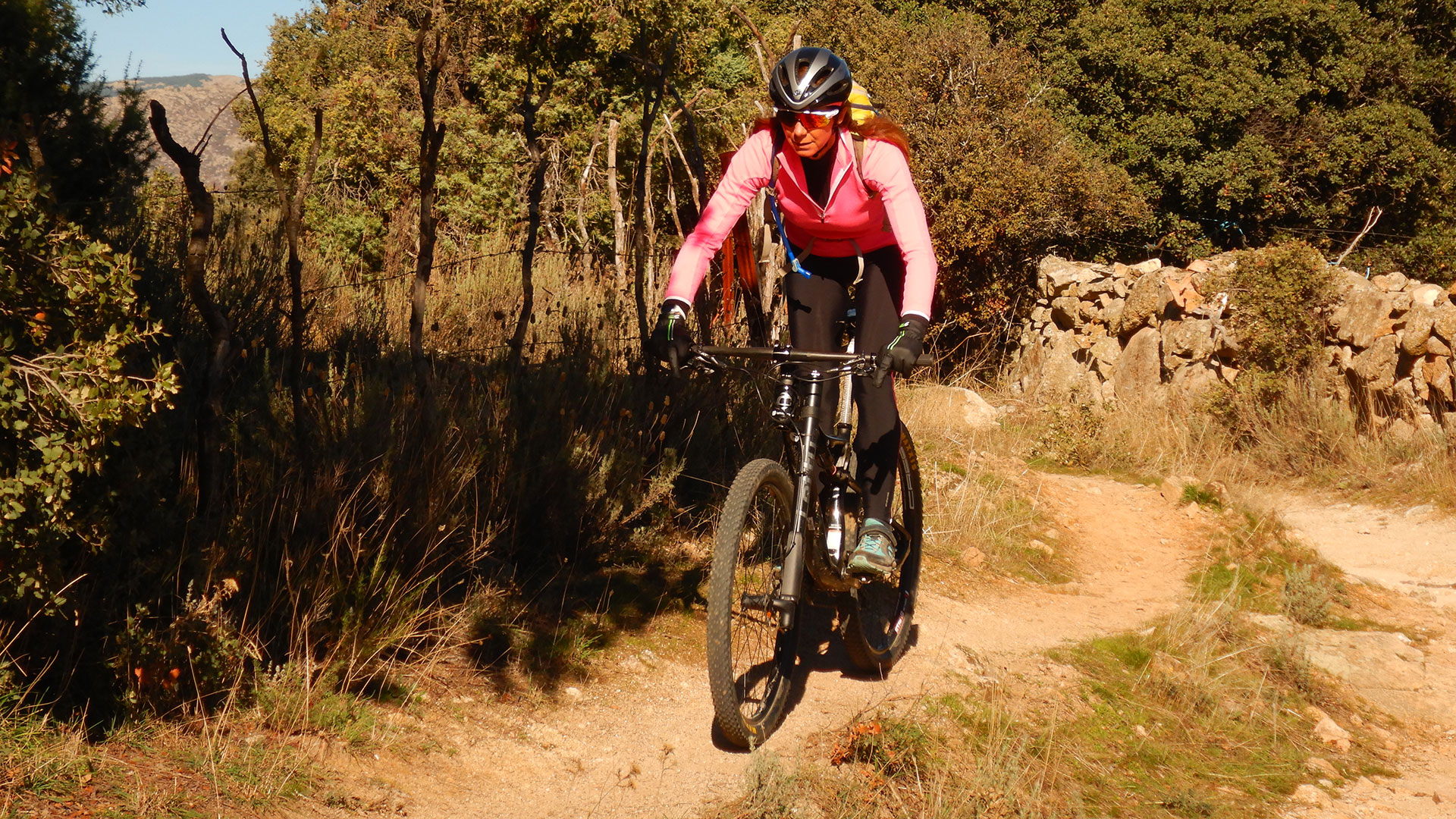 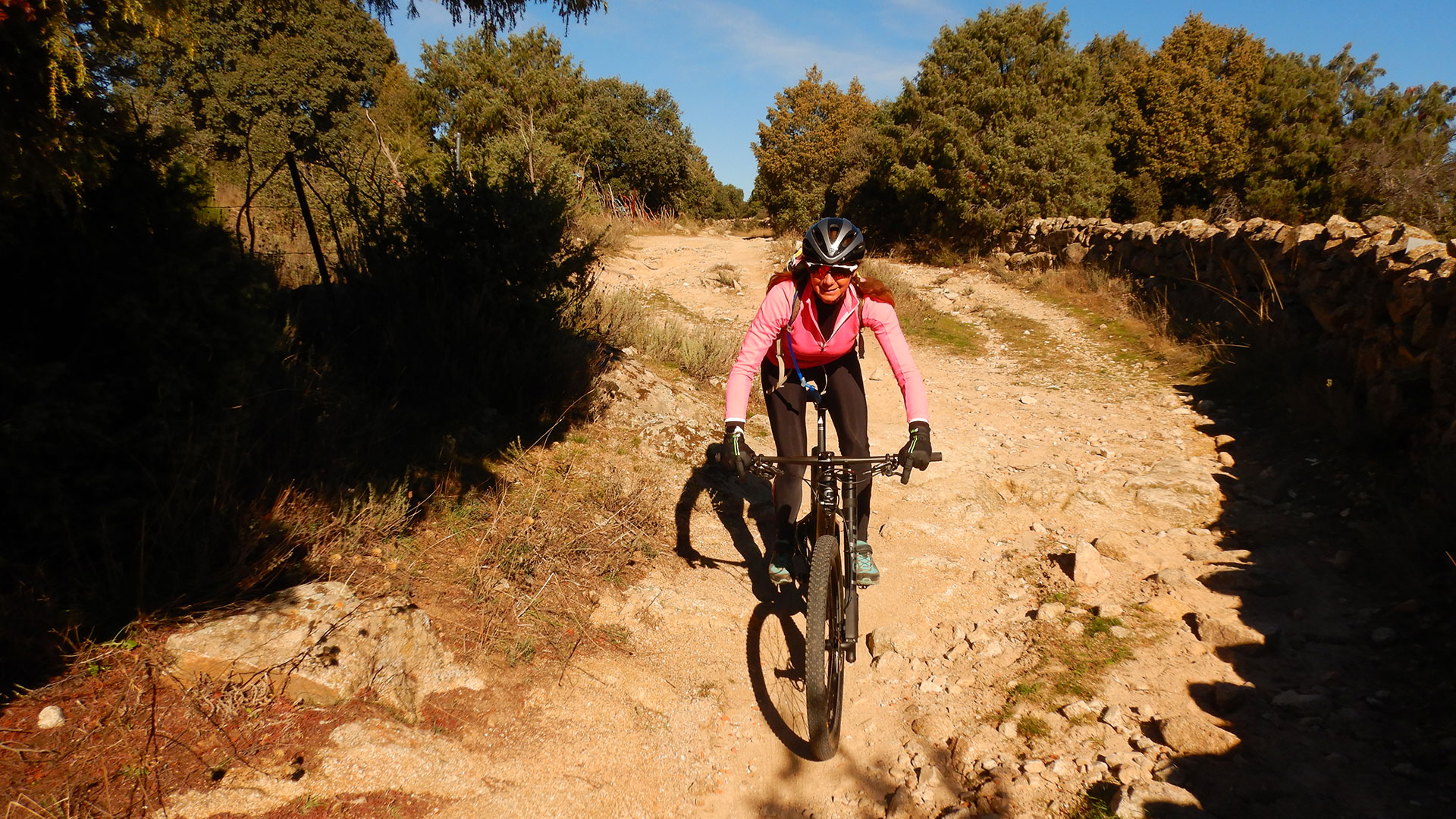 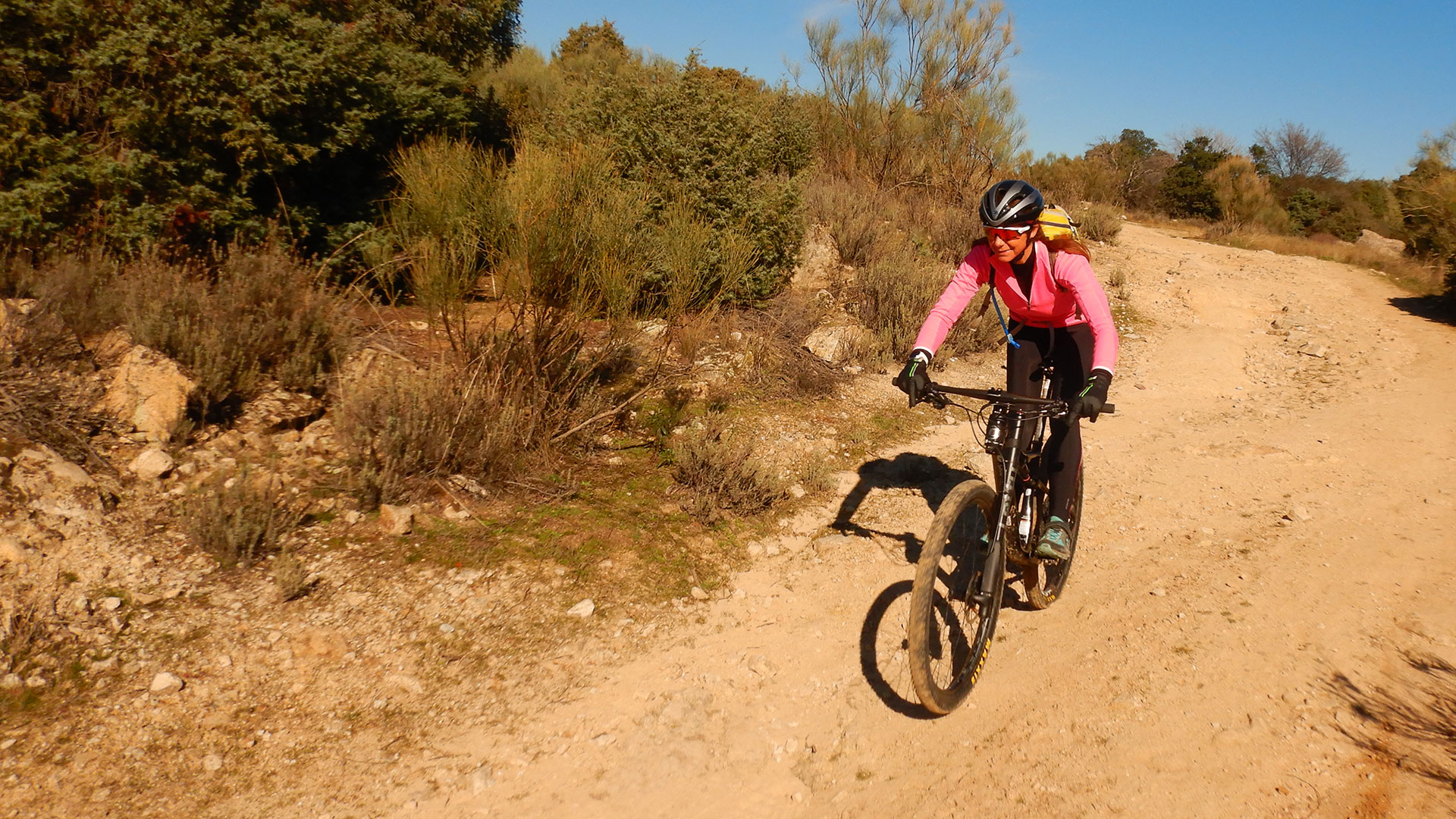 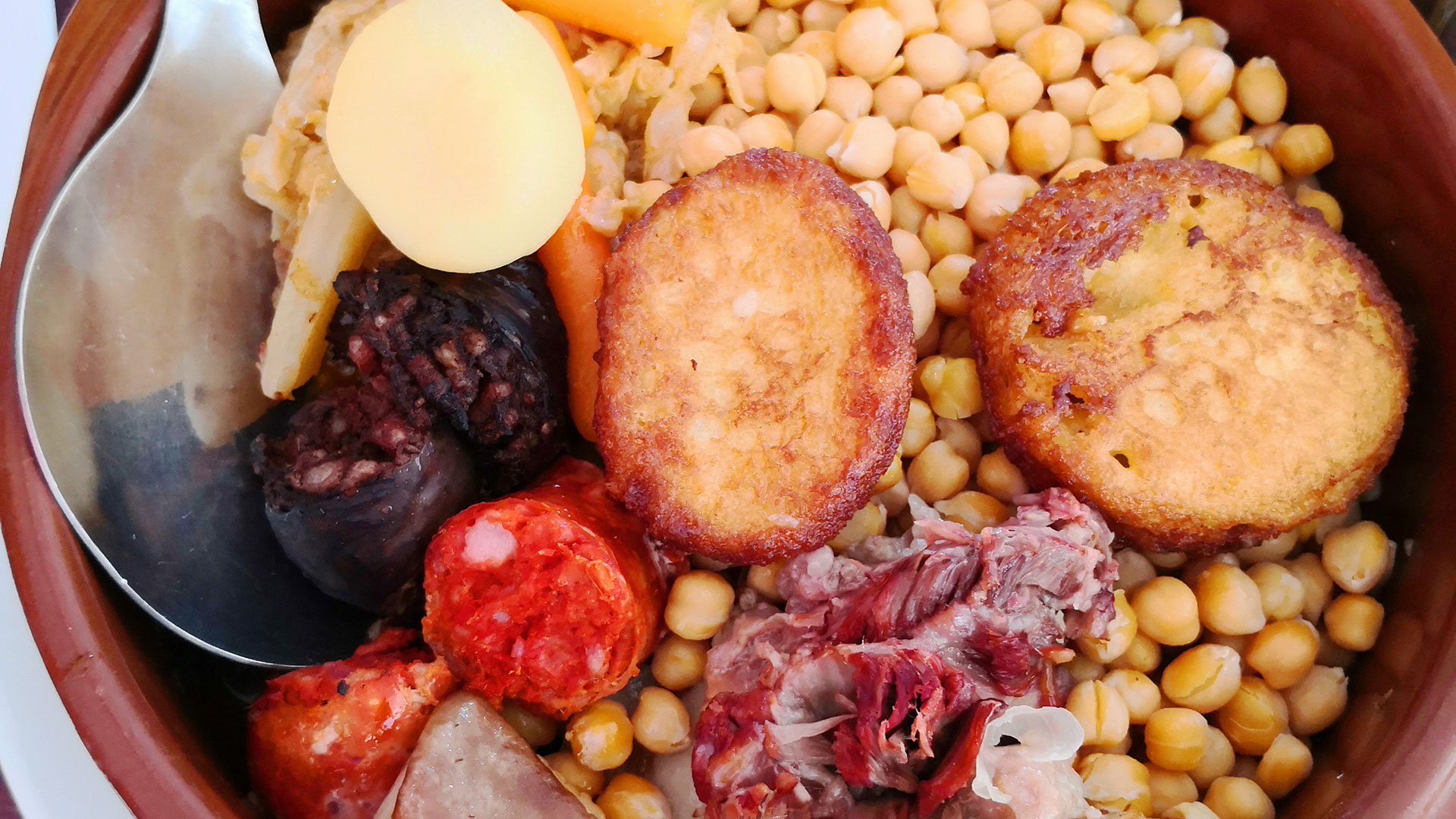