We leave Gorizia from the Best Western Gorizia Palace hotel where we have left the rented cars at the Venice airport.

Immediately we cross the Italian-Slovenian border, to cross the fields passing through Ajsevica, Sempas and Vitovlje where we go back down to Skirlje, Cesta and Adjovoscina where we take the opportunity to eat something and recharge our batteries that allow us to face the day’s long climb to the Dedni vrh in 1217 masl. On the way down we use some of its tracks from the Biker Park Javornik that little by little will make us descend and reach our destination of Logatec.

We start from the Motel Grc Zapolje hotel in Loagatec towards the capital of Slovenia, Luibliana.

With small climbs and then a rapid descent we reach Vrhnika. And even Dragomer is really calm and flat. But there we did not find the first and only strong climb of the day to the Vhr of 540 masl. And between trails and forests we reach the Kamenscica of 464m asl.

From this point we already fell to the Ljubljana plains where we will finish, but before we took advantage and all went up to the beautiful Ljubljana Castle .

We leave from the Best Western Premier Hotel Slon hotel in the center of the Slovenian capital, Ljubljana. By the way we fell in love with its atmosphere and bars restaurants next to the Ljubljanica river.

At 6 km we started to ascend one of the two ports of the day, which would take us to the Kosmati Hrib at 835 meters above sea level. From there we go down, but we cannot trust ourselves because there is not the slope of Sv Barbara. And now if we go down to rest a few kilometers passing through the town of Skofja Loka pedaling afterwards parallel to the Selska Sora river until we reach the town of Selca where the second climb of the day begins towards the Jamnik at 831 masl. And from there we already started to go down to the city and its enchanted with its Lake Bled (Blejsko Jezero in Slovenian). It is a glacial lake in the Julian Alps and one of the most beautiful and tourist lakes in Slovenia.

We leave from the Garni Hotel Jadran – Sava Hotels & Resorts located in front of Lake Bled. A hotel that does not go unnoticed as its structure is completely covered with vines. We portray ourselves with Lake Bled in the background and its castle.

We are sad to leave this beautiful place, but we immediately enter the Triglav National Park. Another wonder of nature near the border with Italy and Austria, it is the only one in Slovenia, but one of the oldest created in Europe, created in 1924. The highest peak gives its name to the entire park, with a summit of 2,864 meters, holding the title of highest point in Slovenia. And it covers practically all the Julian Alps in Slovenian territory, and brings together points of great natural, historical and fauna appeal.

But to enjoy it we have to pedal it and go up. Initially we rolled with a slight ascent about 33 km ascending the Rodvna Valley river until we reached the town of Mojstrana. But almost just before we stopped to eat something in a beautiful place that we will always remember. The Farm, accommodation and restaurant Gostilna Psnak, located in the Triglav national park of Slovenia. It would be the desire, the hunger or the fatigue. But even the lettuce salad was taken from his garden in front of us to prepare it. MMM!

After this oasis, we return to reality and continue rolling, but this time it really begins to rise sharply to the base of the Tislerica at 1,755 masl. It is hard, but you get the gift of the walls of the Triglav of 2,864 masl.

From there everything is down to the town of Gozd Martuljek and then we pedal parallel to the Sava Dolinka river with turquoise waters until we reach our end of the road to the town of Kranjska Gora.

Moderate but hard stage due to accumulated difference of 60.6 km and 2,131 mda +

We leave from the hotel nice and typical wooden construction. Miklic Hotel in Kranjska Gora village. We start calmly by the Jasna Lake. They really are two artificial lakes connected to each other.

We continue upstream of the Pisnica river and immediately go back into the Triglav National Park. That we are going up strongly and in the end we do it using the zetas near the top of the day. The Vršič pass at 1,611 masl at the base of the summit of the same name and 1,737 masl. This port is the highest mountain pass in Slovenia joining the valleys of the Sava and Soča rivers (Isonzo in Italian).

From this point the beautiful descent already begins until you reach the Soca river. We take advantage and take a bath under its beautiful hanging posts. To then continue pedaling through it, downstream until you reach Bovec, our destination today.

We wake up and start the day from the Hotel Kanin and continue going down parallel to the Soca river, like yesterday. Until reaching its tributary Ucja at the height of the town of Zaga where the ascent to the Stol mountain range of 2,236 masl begins.

We leave the Soca valley behind and pass through the pass at 1,390 meters above sea level and descend through the impressive Zetas of the Nadiza valley.
We cross the slope of the Stol until we reach the town of Kovarid, the end of the mountain range where we find the Soca river again.

Stage of which we could consider sincere because there is a long rise in the center and a long descent afterwards. Total 42.96 km and 1,117 mda +

We leave from the Hvala Hotel in the center of Kobarid. This is going to be the last day of pedaling through Slovenian lands on this trip… and sincerely it is sad because it has been an experience and coexistence with these great people.

We drove to the town of Idrsko where the day’s ascent begins to leave Slovenia and enter Italy through the Matajur at 1642 meters above sea level. We climbed little by little until Livek and then we already attacked the worst part towards the Srednji vrh peaks of 1,323 masl and Mrzli vrh of 1,358 masl, both from the Matajur mountain range. Where the thing gets ugly and heavy. We have been getting wet for a long time and there is enough fog.

As we cannot do anything other than move forward, we left Slovenian lands and entered Italian territory, passing by the side of Mount Glava at 1,446 meters above sea level, which of course we do not see due to the fog and we already pedaled down the Matajor base and came across a miraculous one refuge, Dom na Matajure at 1,545 masl that saves our lives. At this time we had no visibility of any kind. We were all unhappy and we saw our partner 2 meters away when the first info that there is a refuge here comes through the walkie talkies! We feel saved. We were able to eat, warm up and dry our clothes. Amazing!
There we made time until the thing opened a little and we already started the descent to the town of Montemaggiore / Matajur and then more and more zetas to go down to Savogna and Sotto Vernassino, ending already in San Pietro al Natisone and Natisone river, we reached our end of stage accommodation.

Stage, that could have been sincere like the previous one, but that the rain and fog of the Matajur pass complicated us. At the end some wet and cold 44.78 km and 1,498 mda +

We start our last stage from the Natisone Hotel. And since it was initially covered and they were still in our heads the day before. We decided to do the first part by road. All down to km 25 where we re-enter Slovenia.

There a small ascent begins towards the town of Dobrovo and then another descent to km 35 when we leave Slovenia again and return to Italy. Now we have to ascend and cross Bosco del Monte Calvario and go down to the Isonco river in the town of Gorizia and look for our first and last Best Western Gorizia Palace hotel. Where our cars were already.

I would sum up this pedaling experience around Slovenia as amazing. Beautiful natural landscapes by the Julinaos Alps and the Triglav National Park. Very good people and good food. 100% Recommended Route!

And honestly, we do it very well. We had hired a van service, Bulletvan Express SL, that took us from Spain, suitcases and bicycles and that daily took us to the transfers from hotel to hotel. A luxury. The rest was already ours. Organization, tracks and hotels … but we are good at it! 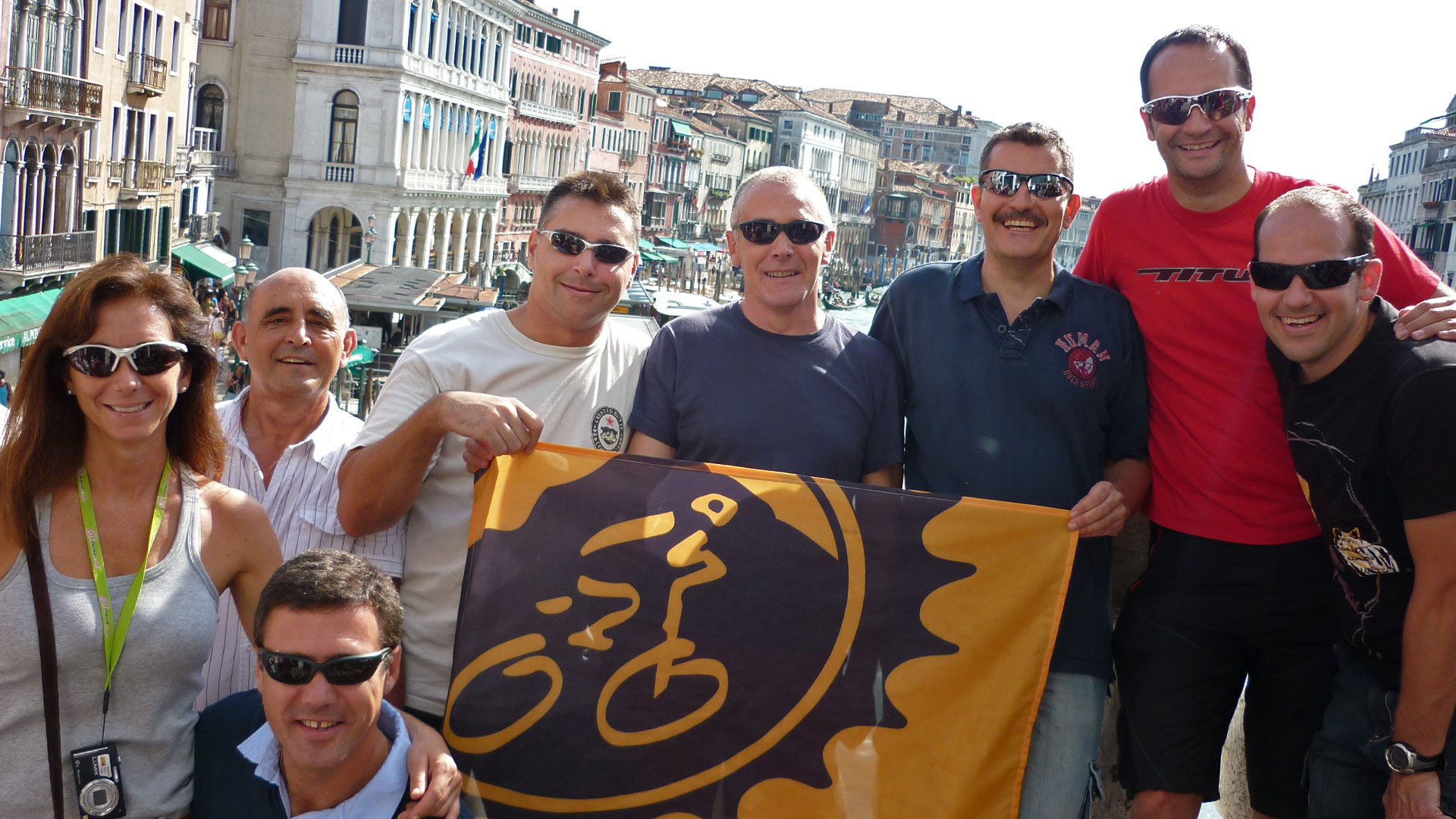 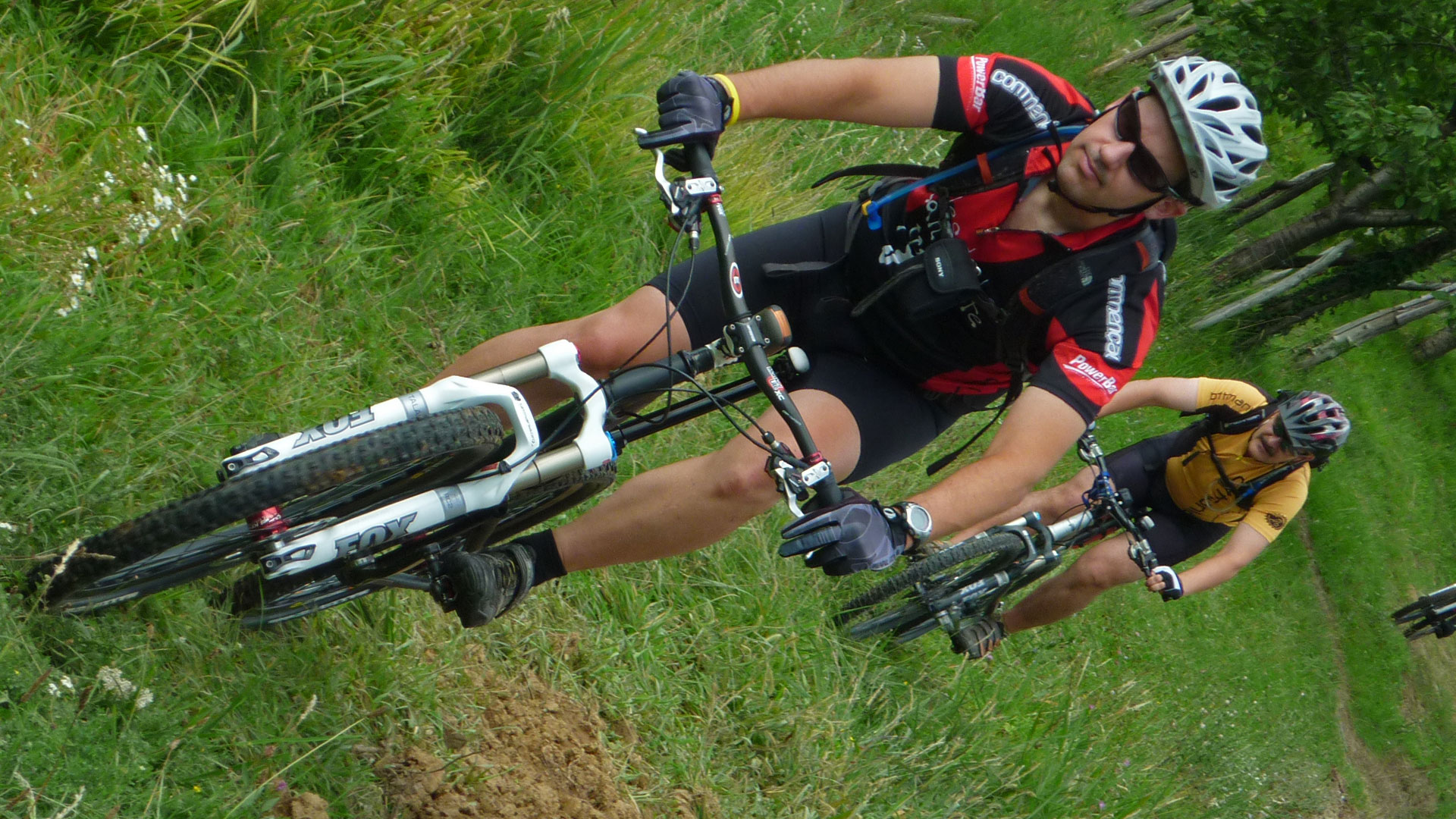 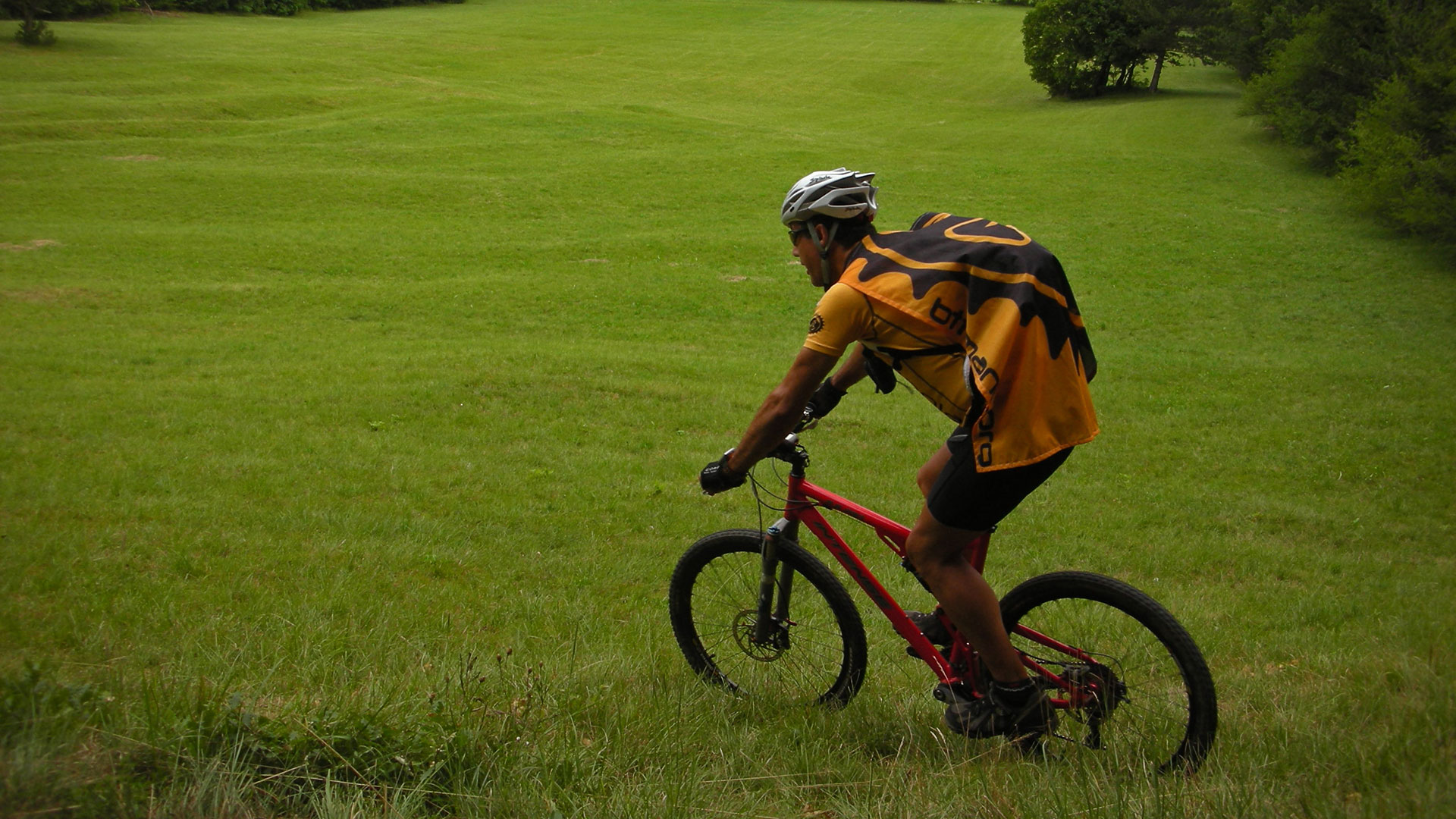 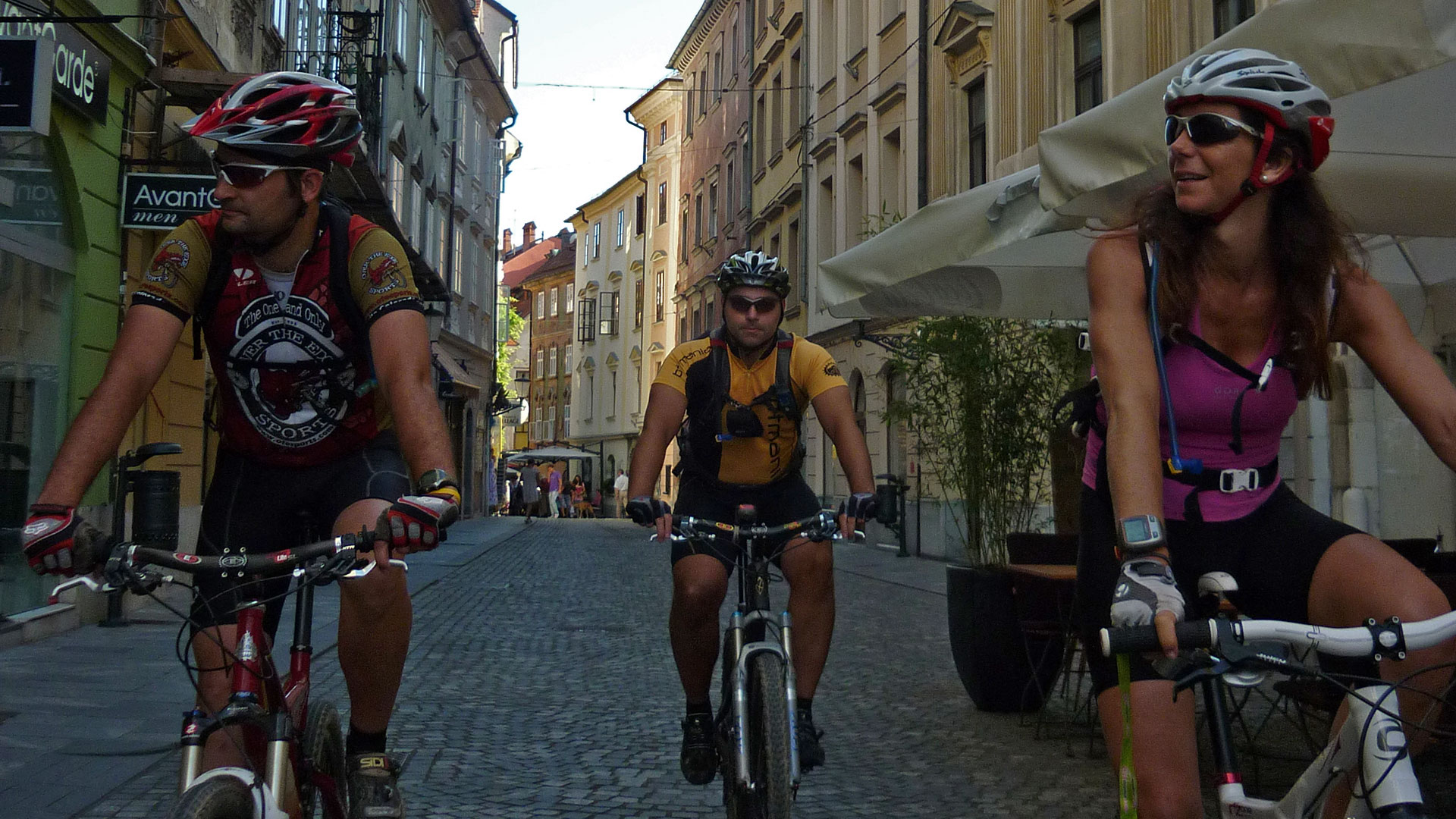 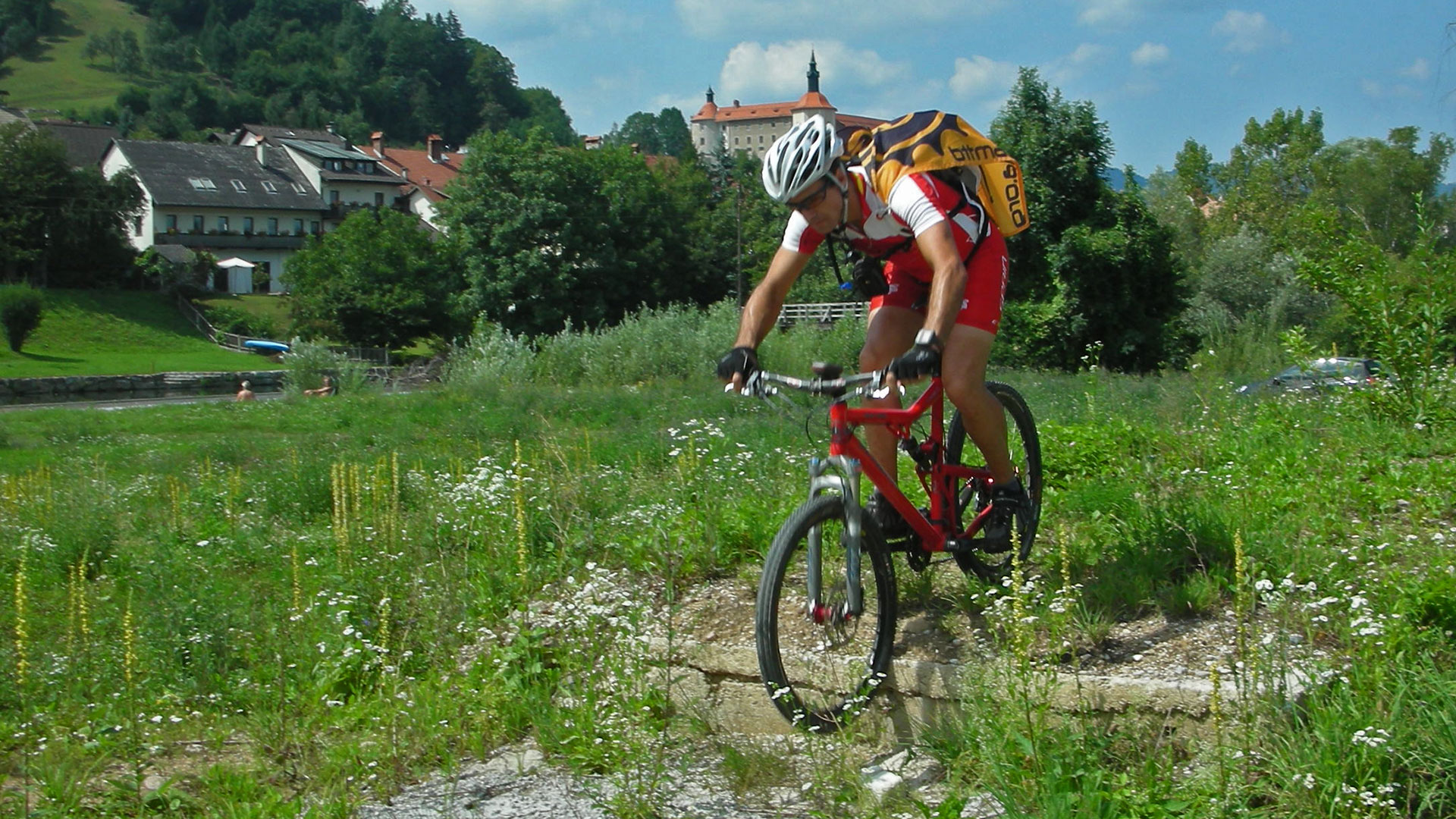 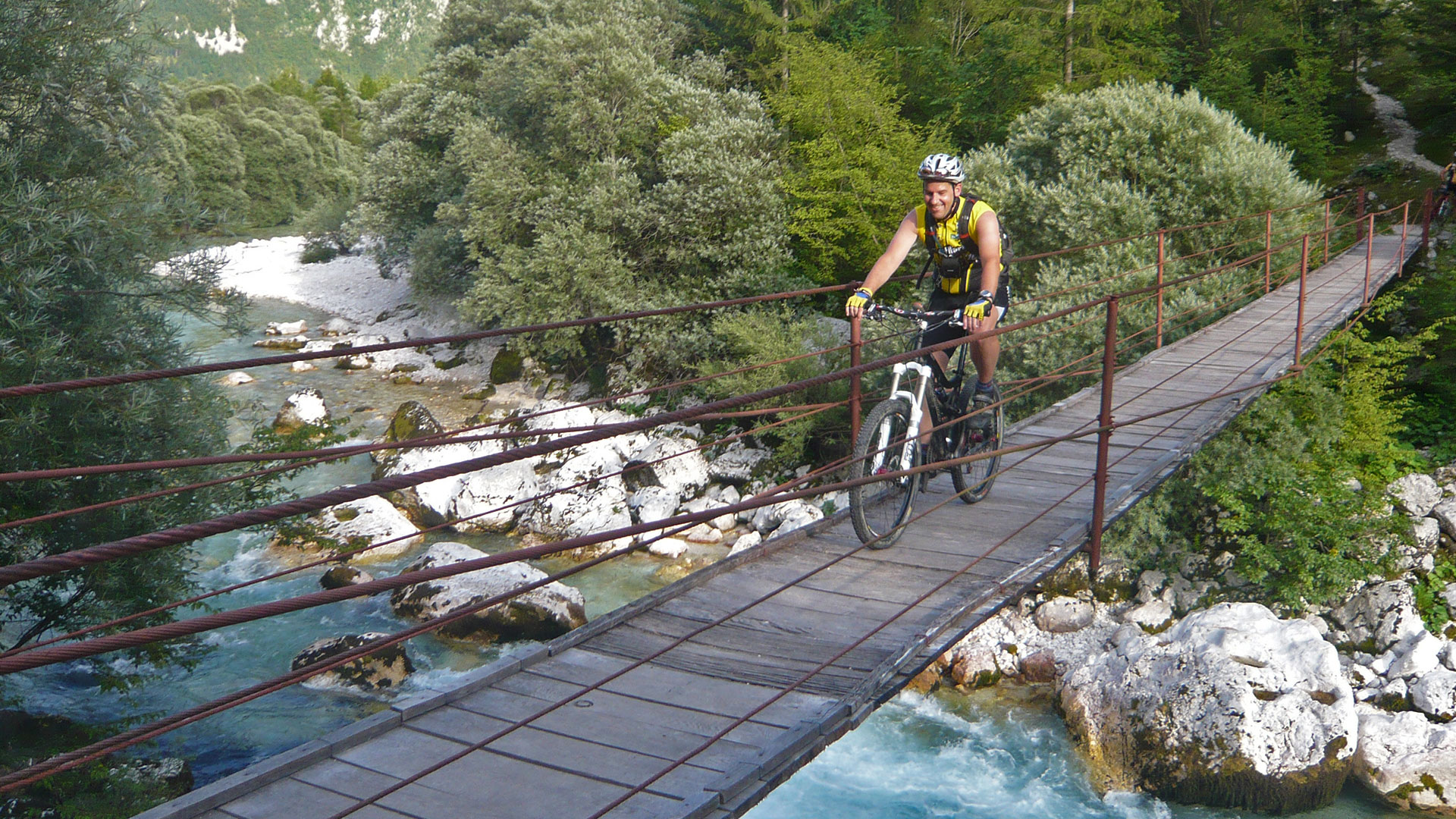 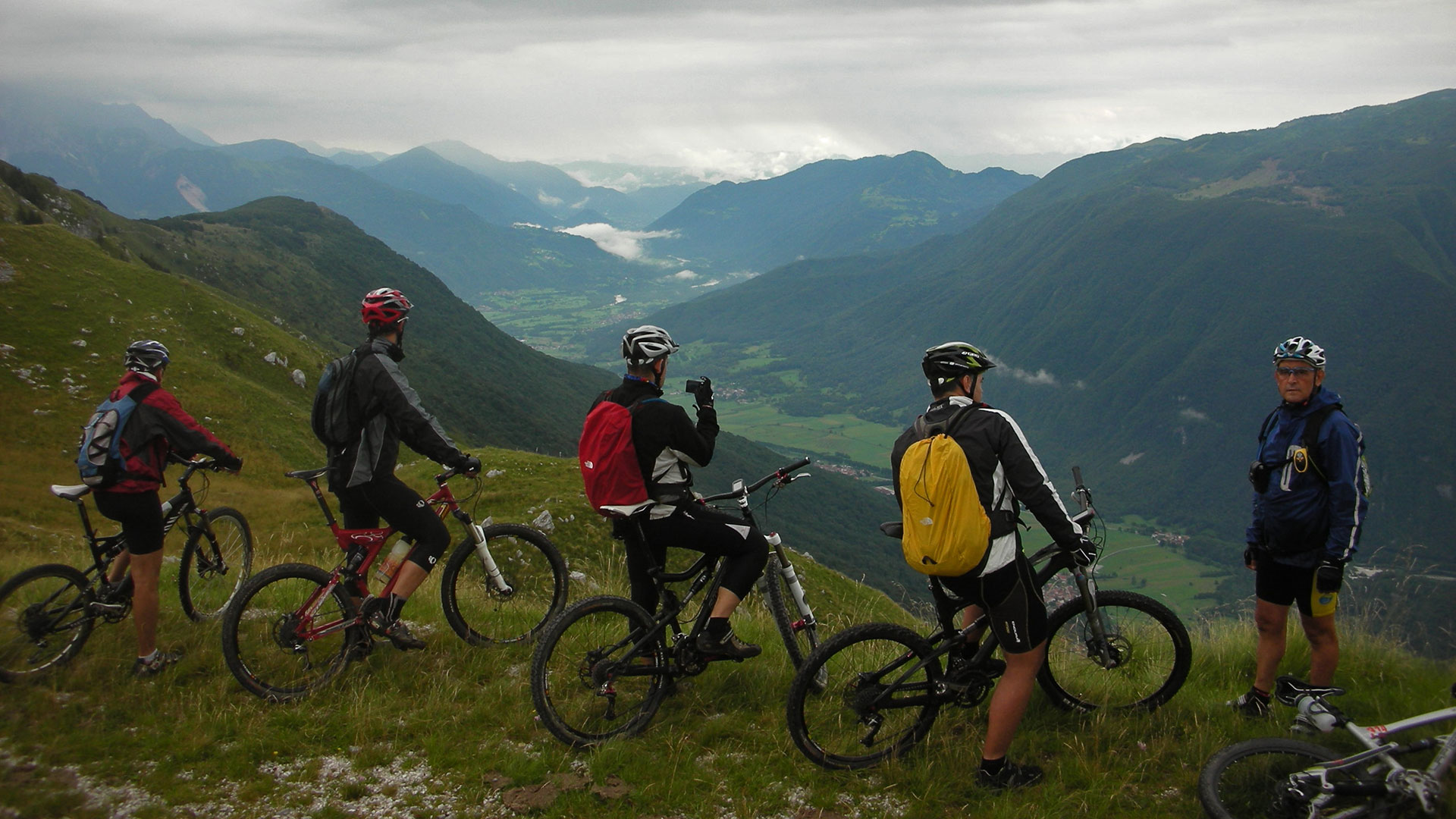 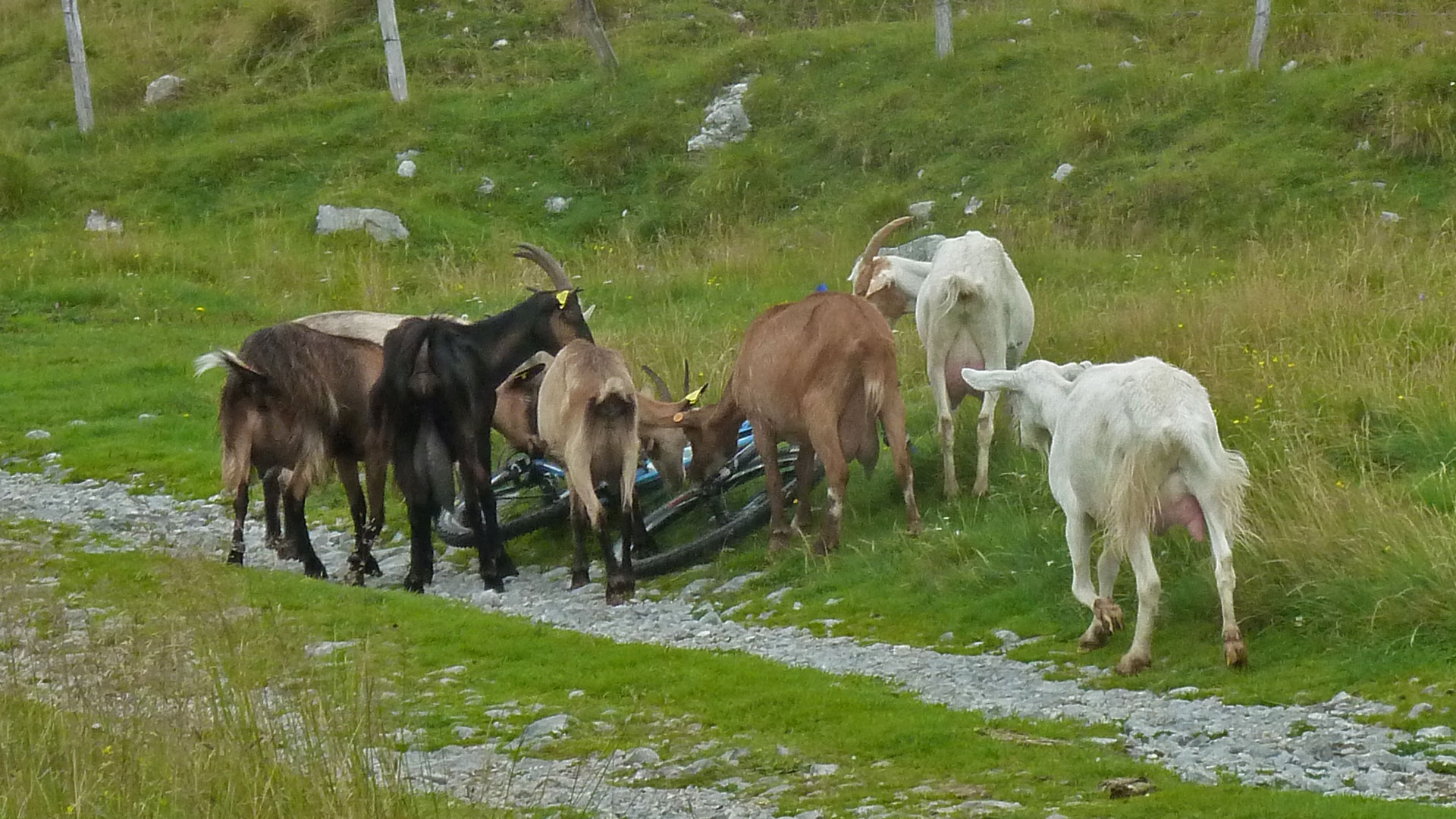 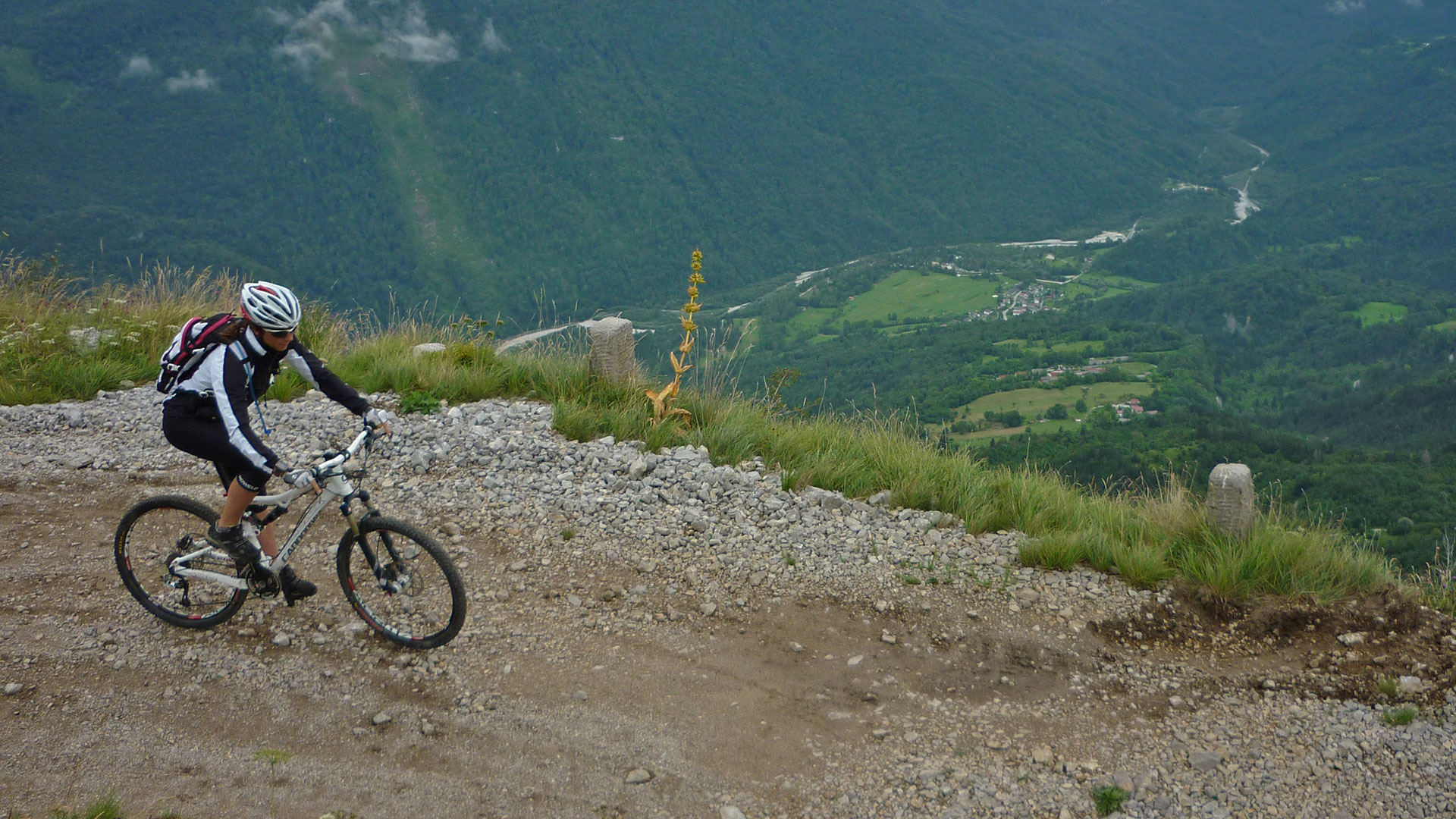 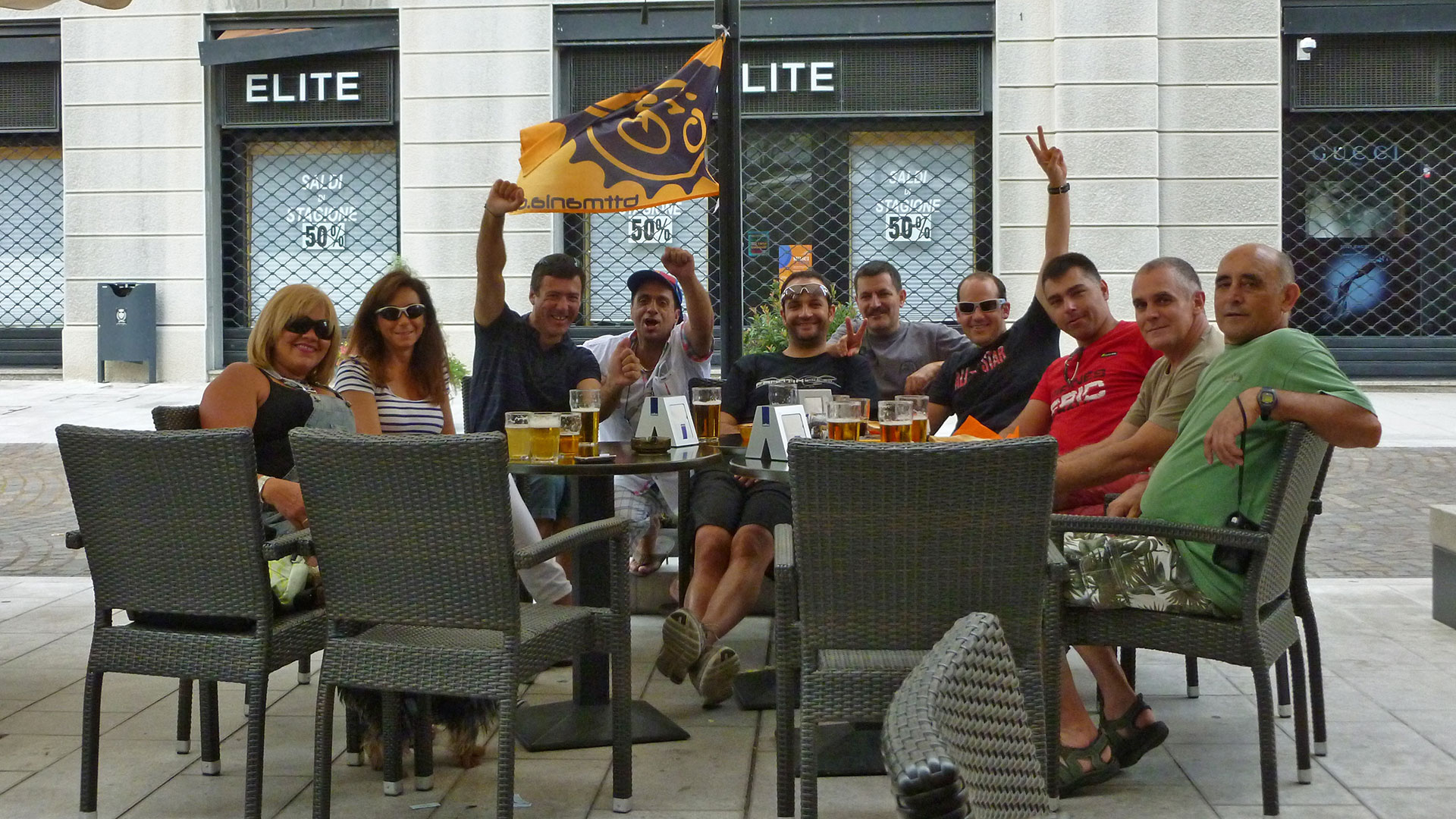